DevOps and PaaS represent two different paradigms for delivering applications to the cloud.

DevOps tends to cater to operations guys that want to maintain the flexibility and control over the infrastructure and PaaS caters more to developers who just want to write code and deliver it without worrying too much about the details of the underlying infrastructure. 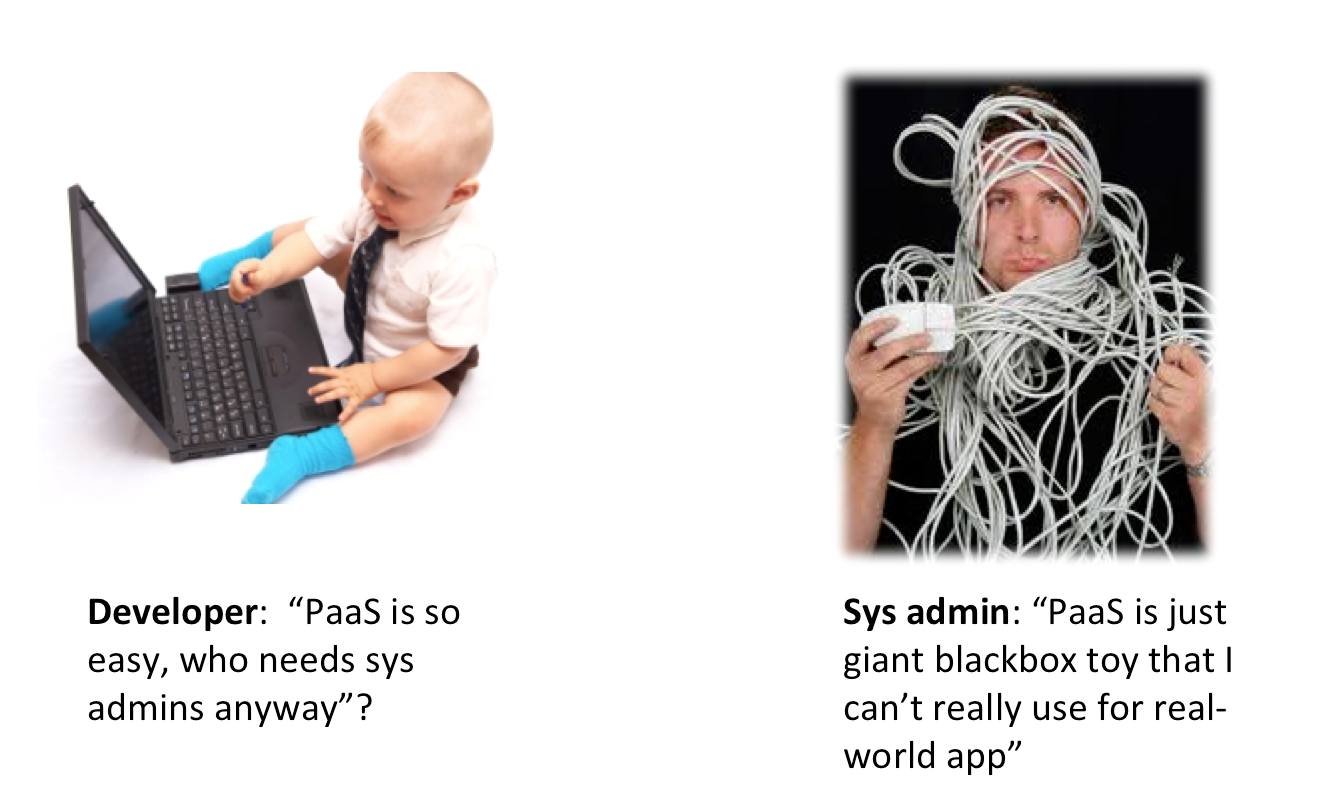 For a while DevOps and PaaS had been considered two competing paradigms as noted in Tom Mornini’s (Engine Yard) post DevOps is DOA:

“DevOps essentially requires everyone involved in the development, deployment, and management of software to change the way they work, to cross-train for multiple functions, and to collaborate with people they’ve all too often viewed as adversaries. It creates new processes and methodologies and, in many cases, uses new tools to get the job done. In addition, it often requires a small army of consultants to implement and manage the transition. That is why the “promise” and “potential” of DevOps has yet to be realized by more than a handful of real-world companies.

…The appeal of the DevOps model fades even further when you consider the fact that there is a better option! You can achieve the intended benefits of DevOps without any of the turmoil by taking advantage of Platform-as-a-Service offerings, or PaaS.”

Putting DevOps and PaaS together

The truth is that it’s hard to choose between the two paradigms. DevOps provides a high degree of control and flexibility but this flexibility comes at the cost of complexity and reduced productivity and often requires a culture change as Tom Mornini pointed out. PaaS on the other hand, provides an extremely simple deployment environment but it also forces you to fit into the PaaS environment, including the language of choice, middleware stack and cloud environment etc.

Do we really need to choose between the two? We can use DevOps as the foundation of the PaaS infrastructure. In this way, the operations guys can choose their stack of choice, package their specific blueprint, pick their cloud of choice and package all that as a pre-baked environment to the developers who in turn can be relieved of all of the details as they would be with any other PaaS. In this way we get the control of DevOps and productivity of PaaS.

At this point I’ll refer to Cloudify as an implementation reference of that concept to illustrate my point in this regard.

Cloudify is an Open PaaS Stack that brings DevOps and PaaS together. Here is how:

The control of DevOps

The productivity of PaaS

Developers can run one of the existing recipes as they would with any other PaaS without going through any of the steps above. Unlike other Platforms-as-a-Service, they can also customize the existing recipes or pick custom recipes that cover their specific environment and application blueprint. All this without losing that same productivity. Developers can also get better visibility into the underlying infrastructure, and have a better experience when troubleshooting. They can also use Cloudify as an automation tool as part of their continuous deployment environment.

“We have a small number of DevOps engineers embedded in the development organization who are building and extending automation for our PaaS, and we have hundreds of developers using NoOps to get their code and datastores deployed in our PaaS.”

An interesting lesson from the Netflix experience is that an important part of running an online service is the ability to resolve any friction for developing and managing such a service. Moving a large part of the operational responsibility to the developers makes it even more important that the development platform (PaaS) come with operations tools that are pre-baked into the developer environment.  At the same time, that same environment needs to also cater to a dedicated (but a significantly smaller) operational team.  This makes the idea of putting DevOps and PaaS together even more critical to reach the business agility and operational efficiency. Netflix built their own PaaS environment to address such a need. Cloudify provides a similar solution for those who want to build their own Netflix environment but without the hassle involved with doing it themselves.

Posted on IT Jungle –…

The Importance of Shaping Value…