Modern Caching 101: What Is In-Memory Cache, When and How to Use It

Modern Caching 101: What Is In-Memory Cache, When and How to Use It 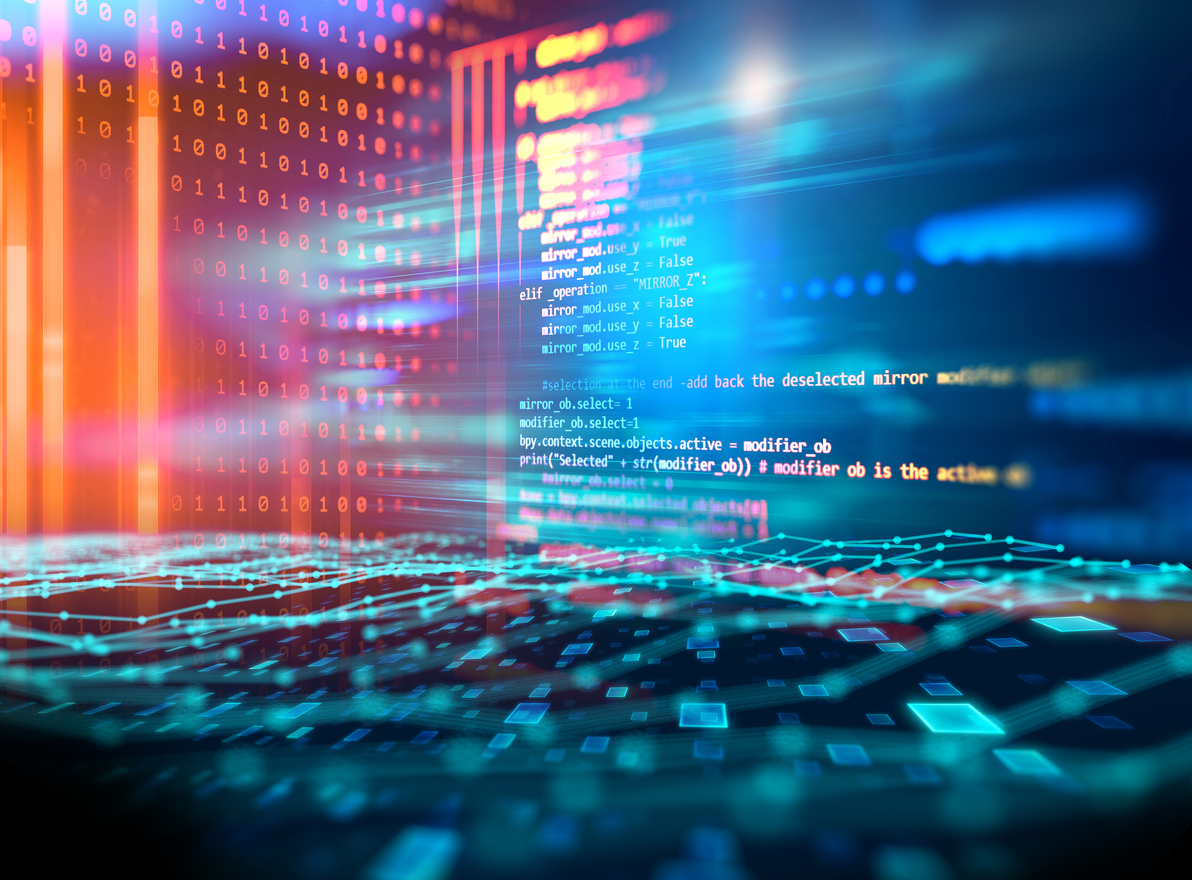 Enterprises are creating and using more data than ever before. IDC’s Global DataSphere Forecast currently estimates that in 2020, enterprises will create and capture 6.4 zettabytes of new data. In terms of what types of new data is being created, productivity data—or operational, customer, and sales data as well as embedded data—is the fastest-growing category, according to IDC. However, as application usage and data grows, enterprise data management system challenges continue to arise.

One of those key challenges is performance degradation. Modern digital applications have to contend with thousands—even millions—of users, increasingly complex data, and more and more data being required to run most applications. Between the need for improved end-user experiences and increased metrics and tracking, web applications are constantly bogged down with data. To add to this, modern BI and reporting calls for ever-increasing speed and more real-time updates. Most of this is, of course, impossible to achieve in standard data warehouse environments.

As workloads grow and new uses for data arise, the challenge of providing a simple and efficient method for delivering optimal latency and handling of both planned and unplanned peaks becomes even greater. In order to manage this, data architects and data engineers can employ database caching techniques to improve the performance of their applications and BI tools.

In this article, we’ll discuss what caching is, various use cases, and the best approach for each to accelerate data access and decrease costs. We’ll also present some of the more popular caching tools and their relative advantages.

Caching: What, Why, and Where

Caching is a technique used to manage frequently accessed data in-memory. The method facilitates access to data while also reducing the workload on the main data stores. Not only can caching enhance performance; it can also improve the scalability and availability of an application.

Caching has a proven track record of helping companies of all sizes improve application performance. And in fact, modern caching services provide much more than just a quick key-value cache. But in order to understand what caching is all about and where it is headed, let’s first review the basics. 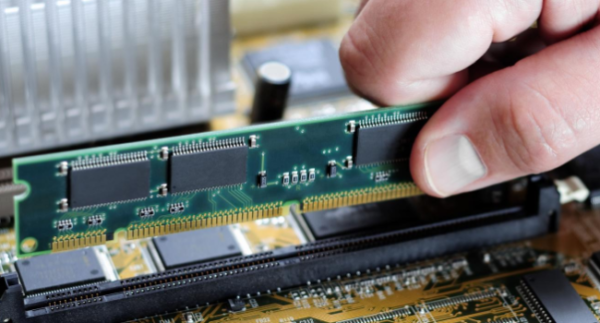 Different caching solutions support different implementations, each with its pros and cons. Data architects and software engineers must therefore consider which solution supports these out of the box and the design that best suits the team’s needs prior to implementation. 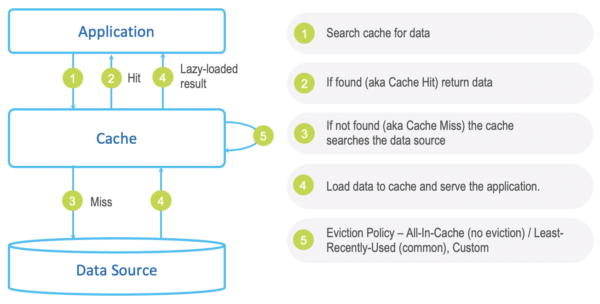 Figure 2: How applications use read-through caching pattern (aka lazy loading) 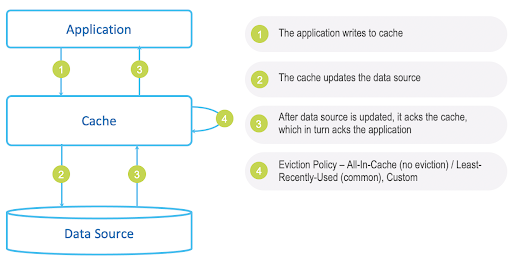 Write-behind caching takes a similar approach to write-through, except that writing to the main database is done asynchronously. This means write latency is only limited to the cache latency. Because it is volatile, however, there is a risk of data loss if the cache is down. That being said, some advanced caching solutions provide both performance and no data loss in case of failure. 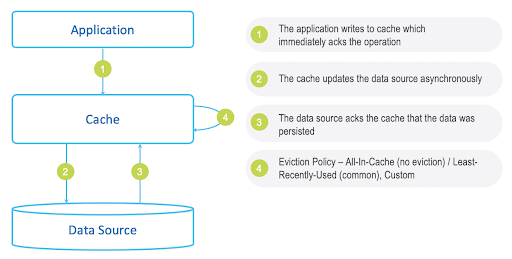 You can’t simply treat your cache as you would a normal database where you store all the data ever entered. This is due to the balance of cost versus performance, as the fastest data tier (RAM) is more expensive than slower tiers (SSDs and hard disks).

Instead, in such cases, an eviction policy can be used to prevent the cache size from going over the maximum limit. The cache achieves this by removing elements according to the rules set by the eviction policy. There are several methods you can implement depending on what the data architect believes will best serve your application.

Each approach has its advantages and disadvantages. Ultimately, the goal of all of these policies is to keep only the data you need in the fastest tier. But these policies are not always sufficient. To this end, some more advanced in-memory cache providers offer an additional option:

Caching solutions can take on many different formats. While the method that might first come to mind for data architects is the key-value cache, this is not the only option, with some cache systems providing developers with additional capabilities.

Some caches are based on a key-value store. This essentially means you can provide the data store a unique key and it will provide a corresponding value back. Because this is all done in-memory, they are commonly used by developers as caching layers.

While some key-value stores are limited in terms of the data types they can store, there are some versions that allow for multiple data types, such as lists, arrays, and sets.

Generally speaking, key-value caching layers tend to be the first technology developers turn to, but these are not always enough. For simple cases, the key-value solution is often fast and efficient. However as data grows and user queries increase, architects are faced with new challenges, such as the inability to index on more than one criteria (adding secondary indexes).

In such cases, key-value stores generally offer the option to duplicate the entire data store so it can be indexed according to the new key. But this process is hardware-consuming (more expensive) and inflexible. Further, more complex relations (e.g., hierarchical and many-to-many) cannot be implemented resulting in the solution being deadlocked.

Data architects are not limited to caching in key-value caching systems. They can also take advantage of in-memory computing solutions that offer SQL support. This includes fully advanced indexing capabilities, such as having multiple secondary indexes, as well as index by exact match, ranges, compound, texts and geo-spatial data fields.

Additionally, some caching solutions support full SQL APIs, which enable a more flexible slice and dice of the data and easy migration from the primary data store.

They also provide both advanced indexing and SQL support, allowing for easy on-demand analytics and BI reporting. Without SQL support or advanced indexing, aggregations must be predefined for satisfactory performance, which involves a great deal of coding.