Space Based Architecture (SBA) vs Tier Based Implementation

Space Based Architecture (SBA) vs Tier Based Implementation

This benchmark compared a typical OLTP application implemented with classic Tier based approach using one of the existing JEE products with Space Based Architecture implemented on top of GigaSpaces XAP. In both cases we used the exact same application code. The difference between the tests was the underlying implementation of the messaging and data layers and the way the application layers were assembled. Learning from this experience we summarized in this whitepaper the steps required to write your JEE application in a way that could exploit the benefit of SBA without locking your code to any specific implementation. The benchmark result of this test is outlined below.

GigaSpaces XAP proved far superior to the traditional Tier-based implementation, in terms of throughput and latency. The results on the same hardware (quad-core AMD machines with RH Linux) were 6 times more throughput, with up to 10 times less latency in favor of the GigaSpaces implementation, as depicted in the below graphs: 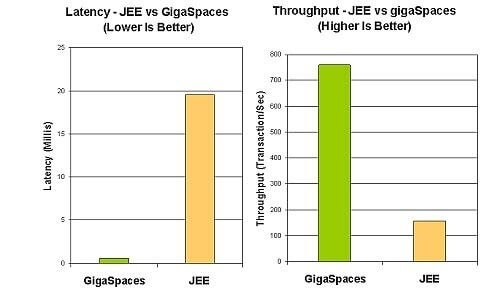 In many benchmarks we used to measure each tier individually i.e. messaging throughput/latency, data layer throughput and latency, however when we bring all those pieces together in our application we are surprised that the throughput and latency does not come close to those results. The reason is that with end to end measurement your as strong as your weakest link. In the tier based approach the overhead of integrating the data, business-logic and messaging together, keeping each one of them highly available and ensuring transaction consistency using two-phase-commit can bring any system to its knees.

With Space Based Architecture, we were able to reduce this overhead by collocating the tiers and by breaking the entire application into partitions each dealing with certain segment of the data. We also used common In-Memory clustering for the messaging, data and business logic which enabled us to reduce the amount of moving parts and avoid the need for 2pc transactions without losing consistency. The result of this benchmark shows the significant impact of measuring the end-to-end performance and latency and how far Space Based Architecture can lead to better throughput and latency then of the Tier based alternative. The test was conducted on a relatively small scale environment. The difference between the two approaches is expected to be even more significant with proportion to the scale.